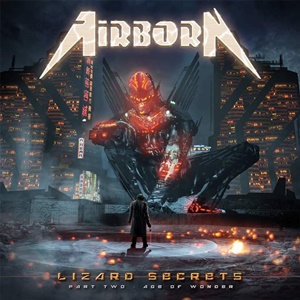 Continuing the second of a three-part trilogy of albums that started in 2018 with Lizard Secrets Part One: Land of the Living, Airborn have returned with Part Two: Age of Wonder. Beginning 2020 in one direction with a successful Hamburg, Germany gig opening for Iron Savior and Paragon, these Italians would change course quickly due to the coronavirus shutting down all touring activities and allow the group to write and record this effort a little quicker than anticipated. Much like the previous outing, you’ll get a versatile Teutonic-like texture to the mix of anthems, speedier cuts, and epic forays that spread out over the ten tracks – continuing this science fiction adventure storyline.

Organ-strains and a space-like atmosphere along with proper choir / double kick placement takes “Soultraveller” into the opener proponent spotlight – an interesting first salvo as it’s not all-out speed and contains some killer guitar melodies as well as solid groove mechanics. Heavier, crunchy vibes penetrate “Follow the Leader”, a heads down metal effort again featuring some sinister cymbal/snare progressive textures against its Accept/Judas Priest-oriented riffs and the twisted Perry Farrell-ish delivery and tone from guitarist/keyboardist Alessio Perardi, the classical strokes sure to engage audience ferocity when aired live. Other songs like “Speed of Life” and “Scarecrow Days” promote elements of Stratovarius and Gamma Ray in terms of style and evolution from riff to riff – as well as the production values and tones, given the snappy snare, robust bass, and alluring guitar/keyboard construction. The epic side appears on the finale “Star a Star” – containing solid twin-guitar harmonies, an overarching galloping nature for a tempo, a tranquil midsection that includes an extended narrative sequence, and fireworks galore for those who love Iron Maiden, Helloween, and Iron Savior.

Inspiration reigns supreme for this middle record of the trilogy. The four-piece execute with precision, grace, and class. Age of Wonder may not necessarily hit the upper bar of say Somewhere Out in Space or the Keepers saga, but Airborn know how to infuse their sound with enough dynamics, hooks, melodies, and moving storyline intrigue that this should appease many who are looking for another supplement record in today’s scene. 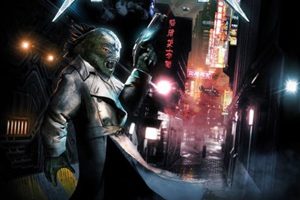