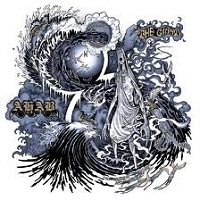 Playing up on the “nautik doom” thing is probably the best thing Germany’s Ahab could do. Reason being, they’re lumped in with the funeral doom scene and it effectively limits their scope, like, big-time. As the band proved on their excellent The Call of the Wretched Sea debut and its The Divinity of Oceans follow-up, there’s an apparent disregard for funeral doom’s rulebook (although this scribe wrongly stated otherwise), with the band very wisely introducing 70’s progressive passages and buoyant clean vocals. On The Giant, Ahab juts out into the sea even farther, with sterling results. (And yes, we’ll make a go at having numerous oceanic references. It’s fun.)

The band has flipped the script on their conceptual basis, turning away from Melville’s Moby Dick to Edgar Allen Poe’s The Narrative of Arthur Gordon Pym of Nantucket. Of course, one can only make sense of this concept when singer/guitarist Daniel Droste and Enslaved’s Hebrand Larson augment the songs with clean vocals, but still…you’re getting an entire package with Ahab (including awesome cover art). Special note should be made of the album’s usage of clean vox, for they create an ethereal atmosphere, most notably on opener “Further South.”

Slow, rotting riffs comprise the bulk of the excellent “Deliverance (Shouting At the Dead)” and “Fathoms Deep Below.” Here, you can practically sense Ahab is looking to build upon what they started five years ago with The Call of the Wretched Sea, only these songs have more character and poise. The story ends with the title track, a lurching, cinematic foray that takes wrestles with the tentacles of classic doom.

An album that the likes of Mournful Congregation and Esoteric would never dare to make, The Giant is perhaps Ahab’s strongest body of work to date. The odes to the past are definitely still there, but the band is obviously intent on exploring new ground…or sailing new bodies of water. You catch our drift.