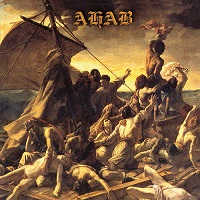 Turgid aquatic doom…if there really is such a thing, then Germany’s Ahab are it. Regaling us with more stories of wave and woe, the band return with The Divinity of Oceans an equally-as-crushing salvo as their 2007 triumph,The Call of the Wretched.

Purely a funeral doom record this is actually not, as Ahab stays out of too-murky waters (yeah, we’re getting carried away with this whole “sea” theme) for some grating, Paradise Lost circa-1990 moments, like on the title track, which gradually drifts into a somber, breathtaking mid-section that is one of the more striking moments on the album. Double-bass rumbles and quasi-melodic riffing make up the other side

on “Yet Another Raft of the Medusa (Pollard’s Weakness).”

Come to think of it, funeral doom is not the band’s strength. In fact, when “O Father Sea” drops, it curtails any lumbering momentum gained from the onset. The slow-mo pace seems to hurt Ahab instead of help, but thankfully, those moments are few in far between. “Redemption

Lost,” a hulking number with graceful melodies and the death metal-infused “Gnawing Bones (Coffin’s Lot)” hold up the back end of the album in suitable fashion.

Expertly packaged, presented, and conceptualized, The Divinity of Oceans will help Ahab further stake their claim as one of funeral doom’s most promising acts. And if you really break it down, this is probably the best album of its ilk for 2009, lack of competition