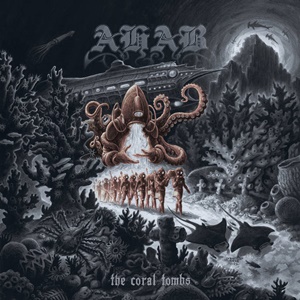 When you establish a unique identity in doom metal as German band Ahab has since the start of their nautical journey in 2004, the key is finding appropriate literary themes to carry out the cause. From Moby Dick to Edgar Allen Poe or horror novels as inspiration for the lyrical content, you can always count on these gentlemen to mirror the funeral doom musical components with an equally compelling story that rivets listeners. For this fifth studio album The Coral Tombs, Jules Verne’s novel 20,000 Leagues Under the Sea receives the nod, a seven-track outing that keeps the darkness, vast expansive caverns in sound, plus adventurous nuances on the edge of your seat for those that can’t get enough of this style.

The surprising blast beat/screaming combinations in the first sequence of opener “Prof. Arronax’ Descent into Vast Oceans” quickly subsides after the first minute into calm, tranquil guitar ambiance with a reflective, melodic vocal before the natural doom riffs plus soothing, heavy tempos kick the arrangement through that slow, slumber swirl of despair. It’s tricky when performing in a genre where slow and slower are the norm to develop distinction song to song -yet Ahab achieve this through the diversity in melodic/death vocals, Candlemass-esque classical-like riff motions (the main hook to “Colossus of the Liquid Graves” key here), as well as special guest additions like Greg Chandler of Esoteric and Chris Noir of Ultha to add their vocal/voice flavor to the mix. The little dynamic elements in terms of bells, seas, or instrumental effects balance out the heavier distortion, almost as if you are peaking into a cinematic, soundtrack movement – Daniel Droste and Chris Hector as guitarists envelop your mind with contrasts in an alluring, point/counterpoint sequence throughout highlight “The Sea As a Desert”. Most artists would exhaust the listener experience placing four ten-minute plus epics to finish a record – in Ahab’s case, this illustrates the wide array of textures and feelings to pull from, colors displayed in an aural, picturesque collage that is an impactful as the main characters’ explorations in the water.

The Coral Tombs is well worth the eight-year break between records for Ahab. Inspirational, effective funeral doom shakes people to their core – and this is another platter that achieves its sonic value, and so much more.