Nautik doom metal is the calling card for Germany’s Ahab – certainly a unique approach in terms of conceptual themes from record to record as the quartet sail on seas and oceans afar. Climbing out from demo ranks in 2005 through their The Call of the Wretched Sea debut album a year later, the band consistently releases new product in three year intervals, only having bassist Stephan Wanderworth as the sole member change in their decade plus career (and that was back in 2008).

Tackling the 1907 novel by William Hope Hodgson of the same name, The Boats of the Glen Carrig is a wild adventure tale filled with weed monsters and dangerous snail-like creatures. Musically the band wish to explore added textures to their familiar funeral doom/death platform, and as such you can expect everything from a pure clean vocals on the Alan Parsons Project cover “The Light in the Weed (Mary Madison)” to a relatively speedier song in the 6:25 “Red Foam (The Great Storm)” which features happier clean bridges in the shoegaze/post punk mold and uplifting chord progressions at times to match.

Four of these tracks clock double digit minutes, as to be expected for the genre- guitarist/keyboardist Daniel Droste guttural utterances (think Opeth or old Scar Symmetry) matching the deep water slumber in measured, sinking capacities. Check out the quarter hour “The Weedmen” for some brilliant semi-gallops, evil brooding chord choices and adequate pacing for such a long arrangement, while the first 2:20 of “The Isle” is more of a sparse study in minimalism, using clean, echoing guitar lines and short verse moments to set the mood for the subsequent electric, exotic doom consumption. And how can you wrong in terms of the psychedelic animation on the cover?

Ahab continue to endure because they relish the opportunity to align themselves in a genre they don’t find limiting – the slow head banging continues as this fourth full-length washes away heavy emotions, returning people to shore revitalized, refreshed, and ready for any challenge that lay ahead. 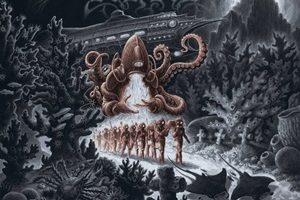