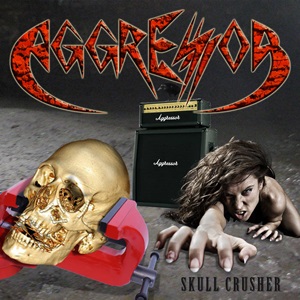 Hailing from New Mexico, Aggressor is a quartet that have been slugging away in the underground since 1996 – releasing a debut album in 2000 as well as a video tribute record for Clutch in 2014. Now celebrating a 20th anniversary with a second original full-length, Skull Crusher is a metal effort that straddles the line between doom, classic, and thrash genres – making this 11 track outing a whirlwind dynamically but often confusing as far as continuity.

Original drummer Mikey Williams shifts to the vocal and guitar position, with Sean Williams on second guitar, J Sin Williams on bass, and Rob Scott on drums – although this scribe is unsure if all three of the Williams musicians are brothers (no bio sheet says so), judging from band photos it looks like at least two of them are. After a few passes, Aggressor live for an older classic outlook on their songwriting – riding a favored riff into the ground, vocally driving a lot of Crowbar meets Testament bellowing melodies into the cranium, and often prolonging the arrangements through intros or extended instrumental sections that do not necessarily add flavor or excitement to the proceedings. The problem is musically these musicians don’t know whether they want to be Danzig one minute for “F214” or Exodus/Testament the next on “Street Justice” – and the result can be an aural stew without cohesion or proper follow through. Beyond the fact that you get a digital-oriented drum overview that weakens the impact of certain tracks (“Hide” especially swirls about in another world when the snare kicks into overdrive from time to time).

Lyrically painting pictures with elementary rhyme schemes straight out of Anvil school, “Edge” for instance has many laugh out loud moments (‘That which does not kill us makes us wonder/why did we stop short/that which does not feed us makes us hunger/we just eat for the sport’) and clues us in as to why they’ve probably relegated themselves to local heroes and not run themselves up the metal ranks. Add in the overuse of vocal effects on “Caring and Sharing”, and you can quickly surmise that Skull Crusher isn’t really living up to its title. Sad to say, Aggressor doesn’t break the mold with this record – epitomizing a middle-of-the-road metal act.