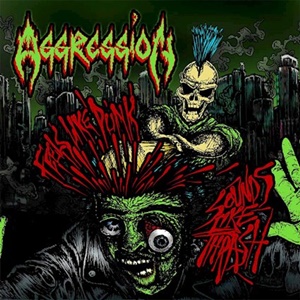 Canadian thrashers Aggression are one of the early pioneers from the Great White North – recording their first demo in 1985 and releasing their debut album The Full Treatment in 1987. They would break up in 1989, return briefly as Aggression A.D. for their second album Forgotten Skull in 2004, and then leave us again from 2006 to 2014, where they’ve been much more active. Only guitarist Denis Barthe remains as the link between all Aggression incarnations, expanding to a quintet for this fourth full-length, Feels Like Punk, Sounds Like Thrash. Leaves little to the imagination as far as the sound and execution, doesn’t it?

You won’t necessarily get the most technically savvy brand of play throughout this record – these musicians prefer to keep the sound very primal, raw, and close to the vest. Even when they choose to be a touch more on the doomy side for the beginning strains of “Jehovah’s Evil Curse”, the tempo ramps up to that Slayer/punk-oriented relentless ferocity – while the follow up “Tales of Terror” digs back into Bay Area influences, the vocals rapid fire and occasionally on the maniacal/growly side with a rather interesting melodic meets shred lead break. The sense of urgency has not left Aggression, and that’s to be commended – as commercial aspirations remain secondary to staying true to the ideals and principles of classic thrash. The circular mid-segment riff twist during “Riding with the Living Dead” probably could cause severe neck strain and bodies hurdling during live concerts, and “Torturing the Deceased” showcases singer Brian Langley at his dual raspy screaming meets lower yet discernible growly best.

Aggression won’t ever be considered innovative or re-inventing the thrash formula – they stick to basic principles developed from NWOBHM and punk, ramp up the energy, and know when to shift the accelerator down in spots to stay away from too much sameness in a slightly over half-hour playback. It’s as if time stood still for the band – and there are plenty of metal consumers who don’t mind the nostalgia trip when bands like Venom, Sacrifice, and Destruction kept things alive and breathing.