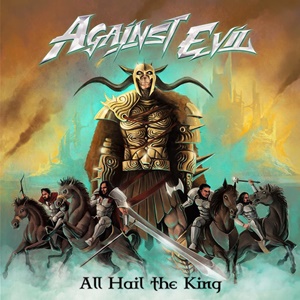 India has made strides thanks to internet culture to improve their metal scene – international touring acts like Iron Maiden, Megadeth, Metallica and others planning tours and festival action on the itinerary for their rabid following. It shouldn’t be surprising then to see domestic acts like Kryptos gain proper label support, fueling the interest in newer bands like Against Evil who deliver their brand of heavy metal to the world. Active since 2014 and growing out of a successful hard rock cover act Echo, the four-piece have issued a single and Fatal Assault EP prior to this full-length – and it’s obvious after even a cursory glance that All Hail the King fulfills the traditional, 80’s to 90’s oriented heavy metal checklist most followers crave in quick succession.

The formula for these nine tracks relies on robust guitar rhythms, solid rhythm section mechanics, and simple, effective choruses with proper gang background supplementation. The type of guitar attack with double kick action that put Judas Priest, Accept, and even Megadeth (the 1990’s side) at the top of their games – amply displayed during the upbeat “Sentenced to Death” (featuring a blistering solo from Arch Enemy’s Jeff Loomis) and marching to war-oriented title cut (Accept would be proud of their influence on this one). Vocals are split between bassist Siri and rhythm guitarist Sravan – and while not necessarily the eagle high notes come flying a la Halford, Dio, or Dickinson, there’s a comfort in the mid-range bellowing and aggression that complements the down to earth nature of the tight musical arrangements. The modern production elements bring up a thicker, biting edge to the guitar tone which along with the punch of the bass/drums probably will make most think of Primal Fear – but it’s hard not to think of synchronized stage moves during an anthem like “Bad Luck” or “Gods of Metal”.

Beyond a prime-time illustration for the cover that screams to be blown up as poster size wall material and the tidy 35-minute time frame, Against Evil with All Hail the King could be one of the best newcomers for 2018 in this space – raising fists and vying for backpatch approval on jackets worldwide. 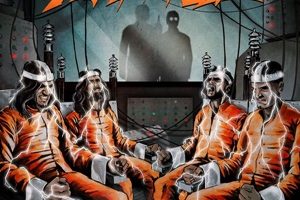 Against Evil – End of the Line (Self-Released)