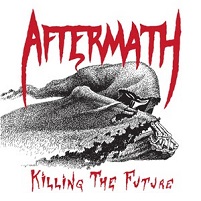 Aftermath’s Killing the Future was originally released as a demo on cassette in 1987, but leave it up to the fine folks (er “folk,” which would be Matt Rudzinski) at Divebomb to dig up yet another lost relic from thrash’s storied past. Aftermath (who hail from Chicago), never made it out of unsigned status, going as far as to get a healthy mention in Kerrang where upon Don Kaye said the band were “too damn fast.” Definitely fast for 1987 standards, the uppity nature of Killing the Future is crossover thrash personified.

No real slow-down across any of the demo’s 10 songs (by the way, the thing has been carefully remastered and repackaged), the velocity in which the guitars of Steve Sacco go is indeed, pretty damn fast. Vocalist Charlie Tsiolis is never too far behind, though, particularly on the appropriately-named “Chaos,” which serves as the album’s real “wow” moment. Then again, there’s not much to mine from after that point, Aftermath getting a little too caught up in their speedy britches. The band’s tightness and tenaciousness is spirited, yeah, but so were a vast portion of competing bands at the time.

The Aftermath story didn’t end with Killing the Future. They would go on to gradually alter the sound (read: they varied things up to where the songs were slower and had more dynamics), leading up to the release of their lone album, 1994’s Eyes of Tomorrow. Heck, the band even rebranded themselves as Mother God Moviestar for a run in the late 90s, yet the real focus will always be on Aftermath’s mid-to-late 80s years, Killing the Future being the most significant release. It’s certainly worth a go if high-action crossover thrash is your ‘thang.