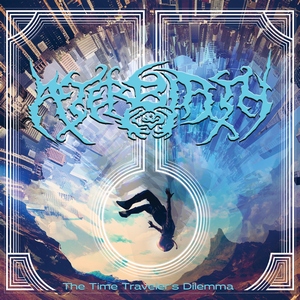 Afterbirth is a perfect example of ‘don’t judge a book by its cover,’ or in this case, don’t judge the album by the first few notes. The there and back again act (who dissolved in the early ‘90s after releasing one demo) has returned, with the help of Will Smith (Artificial Brain/Buckshot Facelift) to cement the line-up and deliver their first full-length effort. And it’s more than meets the eye.

As eluded to already, the first few moments of “Eternal Return” may lead you to believe that this is more of a slam-based death metal act (they are based in Long Island after all). But as you continue along in the journey, you’ll find that the slam element is one of several as it begins to wander further down the rabbit hole. An intriguing release in that it seems to get progressively more eerie and strange as it continues, by the time the band reaches the closing (instrumental) “The Time Traveler’s Dilemma II,” you’ll be sold on their more unique vision. The vibe is a bit creepy, subterranean, and somewhat mysterious. A taste of that skronky death metal sound infiltrates, along with the slamming brutality to keep you in check. They can really rev up the intensity (“Sifting Through the Sands of the Unholy”) or they can drag you through the mud if they want with some slower grooves and ambience (“Timeless Formless”), allowing for a versatile attack at either tempo that is often laced with cunning melodies that may burrow below the surface for a few listens. Which of course lends itself well to some return listens. As does the strange and otherworldly vibes (enhanced by Smith’s usual uber-low gurgles and trippy interludes) that set the band more into their own sonic space.

An album meant to be heard from beginning to end, The Time Traveler’s Dilemma unfolds in grim and eerie ways as it moves forward. There’s much more than what appears initially, so give it a fair shake as it’s more of a grower than anything else. Enjoyable for those looking for a bit more out of their death metal than simply brutality. 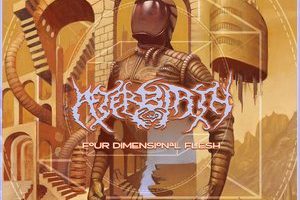