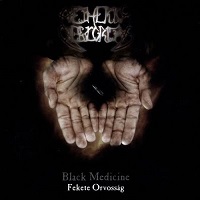 The infusion of melody into black metal is forever a source of debate. In its glory years, melody was a huge (for lack of a better term) no-no, thus preserving the sanctity and “trueness” of its craft. Once symphonic black metal swooped in and started peppering BM with melody, it was every man for himself, but per the usual, when done right, melodic black metal can produce staggering results. Cue Black Medicine.

melodies give songs like “Final Breath” and the glorious “Passed Out of Mind” dark new dimensions, ones that perfectly align with AO’s traditional and identifiable take on black metal.

Only when the band plays it safe do things sputter, but that’s only evident on “Grim Smile” and a forgettable cover of Marduk’s “Black Demon.” Outside of that, there’s a lot of atmosphere-soaked maneuvering going on, all without the flank of keyboards and phony choirs. And that’s the key to Black Medicine: it’s a balanced attack, with no gimmicks, just stout, hard-working songs

that are in line with the essence of black metal, but make no attempts at covering up the oh-so necessary melodic slant of this thing. Killer.