Aetheric – Serpents Beneath the Shrine (Self-Released) 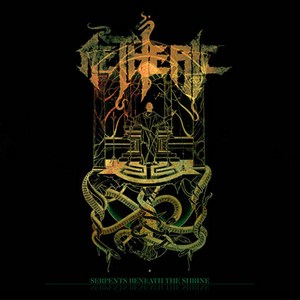 Those who think that fast playing can’t still be memorable need only to check out Minnesota’s Aetheric to be proved incorrect. Their first full-length album, Serpents Beneath the Shrine, has all of the face-melting speed that one wants to hear in the extreme metal category, but it still manages to stay fresh. The key is some well-placed groove and melody of course.

One of those tough to call bands where you can’t quite place a simple sound description, Aetheric seem to run a bit of a spectrum of death metal influences. There’s the technical side of course, with a number of the songs displaying some intricate riffing patterns and a bass that isn’t afraid to venture out on its own audibly. But there’s also some rooting in the melodic waters as well, similar to a number of newer US acts (The Devils of Loudon and Carrion Vael come to mind) that meld breakneck and thrashy tempos with flashy melodic riffs and leads. There’s also some sheer bulkiness to the riffs, and they aren’t afraid of utilizing some groove when they slow the tempos a bit. All of this wraps up into a sound that can be of blistering speed and high energy yet doesn’t fall apart due to the changes in tempo, where other strengths (like melody/groove) keep the band on an even playing field. Most importantly though, it keeps an aggressive nature, even at its most melodic, that helps to unify the band’s mission statement.

Memorable and able to propel themselves at some blazing speeds from time to time, Aetheric make a big splash with Serpents Beneath the Shrine. The ability of the young act to muster equal amounts of tech “wow factor” and melodeath goodness should place them as an act to watch for anyone looking to grow their modern death metal collection.