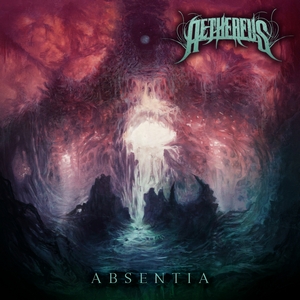 With so many more bands entering into the tech death arena every day, it can be a real struggle to provide something that feels fresh. First exposed to Aethereus two years ago at this point through their first release Ego Futurus on Bandcamp, it did seem as if the band was attempting to separate themselves from the pack. With Absentia, they prove that they are certainly on their way towards doing so, with an effort that should please fans of the more progressive side of the genre.

From the onset of “Cascade of Light,” Absentia comes in a bit of melody and progression before the riff salvo dives them directly into more technical territory. The melodic side of the band is ultimately what gives them a bit of breathing space, in finding ways to insert some catchy material into some occasionally ferocious tempos. Loosely basing the album on the five stages of grief additionally gives them some room to make the music go outside of the box. While death metal might not be the go-to in order to make something like this work, you can hear a difference in the playing and sound as you venture from more chaotic opening tracks (the afore-mentioned “Cascade of Light” and “Writhe”) towards slightly more upbeat material with “The Black Circle” and “The Pale Beast.” Being a tech-death release though, there is the pre-requisite level of musicianship present, and it takes the music into some different directions than simply riffing away with reckless abandon (check the title track for concrete proof). Solid basswork (Ben Gassman) and vocals (from Vance Bratcher of The Devils of Loudon) round out the mix for a formula with presence and appeal.

Those who enjoy the proggy/melodic side of tech, such as Obscura or Gorod, are bound to click with Aethereus. The technical and melodic aspects build the album into something stronger together, and present the band with some further opportunities to boost both in their near future.