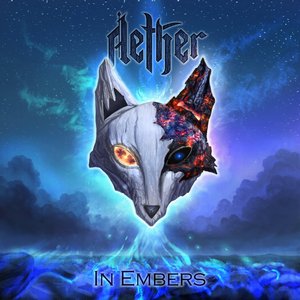 Aether’s previous EP, Tale of Fire, provided some melodic death/folk promise even if it was something that wasn’t exactly the most innovative. The band’s Wintersun/Insomnium-esque flavors checked off all of the ‘must-hear’ boxes with a definitive fun factor though, and as such, the band’s full-length, In Embers, continues along those same lines. Something familiar yet still rather enjoyable.

The opening really does cover much of Aether’s groundwork. The moderately folky take on melodic death metal leans fairly heavily towards the bombastic and epic vibes of Wintersun, with a tad bit of the longing of Insomnium lighting up along the way. But such a comparison isn’t such as bad thing, as these two represent some of the top names in the genre for many, and Aether’s songwriting makes it hard to do anything but admire the music. The epic riffing and synths go together quite easily, and they are often backed up by some equally compelling lead and solowork. “Tale of Fire” is a good example of this, with gallant riffs riding high, employing some soaring melodies and a mesmorizing solo only to then shift towards a few seconds of acoustic guitar and well-implemented clean vocals. Much of the music, as it could be imagined, is quite driving in tempo and is meant to dazzle the listen, and it often does. “Forest” is highlight here, as the melodies swirl around the potent roars and progressive leanings in a way that you can’t help but raise your fist up at the chorus. “Valhalla” is also worth noting for its ability to really get your blood boiling with its energy, along with its immediately catchy tone. It’s worth mentioning that the guitars do much of the melodic work too, with only some slight clean vocals used (and some female ones on “Dream”) – something melodic death diehards will no doubt appreciate.

In Embers bathes in epic fury and driving melodies, and is sure to scratch that melodeath itch. Sure, there’s a level of familiarity to it, but the excellent songwriting overpowers it, delivering an album that’s a rollicking good time.