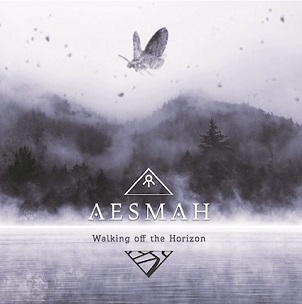 Melodic death metal has sustained itself largely because its bands became more progressive instead of the opposite, which, if you really ponder it, is metalcore or modern-day In Flames territory. Where it was once expected and suitable to simply fly off the handle with a variation of Slaughter of the Soul riffs and acidic vocals (with some cleans, of course), current melodic death metal bands are at their exploratory best, namely Be’lakor, Insomnium and Shylmagoghnar, to name a few. France’s Aesmah certainly falls into this category, flinging elongated, labyrinthine arrangements across their first proper full-length, Walking Off the Horizon.

Originally formed in 2009 and with only two EPs to their credit, Aesmah does benefit from a largely clean slate and the lack of expectations. While their formation a decade ago would suggest a veteran unit who is able to corral whatever ponderous arrangements they have in mind, the far-reaching nature of a good chunk of the songs here suggest Aesmah have too many things on their plate instead of focusing on the main course. Riff-wise, they are of the vintage Gothenburg mind, occasionally peppered with newer, modern elements (see: “Nameless Echoes” and the synth pops of “Ocean of Veinings”). You could see where the Be’lakor comparisons come into play, particularly when the occasional tinge of melancholy enters the fray, but, Aesmah is often so enamored with cramming idea after idea into each song that they never quite resonate the way they should.

It has been argued to this scribe and often reciprocated that some bands don’t actually write “songs” — they simply jigsaw a collection of riffs and ideas and let the chips fall where they may. Now, that’s not always a bad thing, but when thinking about Aesmah and their otherwise formidable assemblage of Gothenburg-hugging-Finnish-melancholy riffs, you wouldn’t be the only one just dying to take a pair of scissors to these songs to trim the fat.