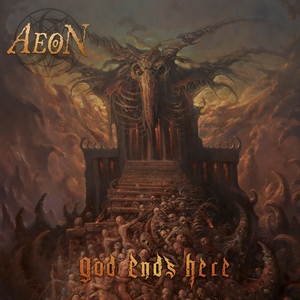 Swedish death metal act Aeon has been away from the scene for a bit.  Their last album was 2012’s Aeon Black, so to say that there’s been a continual uptick in death metal acts would be an understatement.  Aeon’s sound has always lied in that ‘90s sweet spot, which many overlook in trying to deliver their take on early Death or Entombed, or twist things into a tech-y spot.  So Aeon’s return is a welcome one for those seeking straight-forward, angry death metal.

God Ends Here sounds much like what you’d expect Aeon to do with their material.  It’s pissed off, aggressive, and favors brutality above all else.  But in sticking to their ‘90s influences (think more American than their fellow Swedes), there’s a touch of melody to their offerings instead of it being a total blur of heaviness.  Think Cannibal Corpse or Deicide if you need a quick comparison.  As the band’s fifth full-length, it’s fueled by seething intensity, and we wouldn’t really want it any other way.  The double-bass and blastbeats are raging, the guitar riffs are meaty and thick – the type that’s perfect to pummel, and the vocals are brutal but still intelligible.  There are a number of little interludes over the course of the album, which work to keep the songs from really chunking together but they don’t add a great deal other than some breathing space.  As for the songs themselves, “Forsaker” and “Despise the Cross” sit on the top shelf for their uncompromising viciousness and in-and-out runtimes (under 3-minutes a pop), but that said, closer “Queen of Lies” is the lengthiest cut and does it justice with some more epic feeling to it as well as some pounding mid-tempo riffs.

Aeon give a solid return with God Ends Here.  It’s enjoyable, fast-paced and violent death metal that doesn’t pretend to be anything that it’s not.  Come for your fill of brutality and Aeon is happy to provide a well-balanced portion of it here.