Goes without saying, but the Greeks have always had their own way of going about extreme metal. It’s a daunting, but underappreciated stance, one that has borne the country several legitimate, cult-like bands, but none that have topped the underground stratosphere. Since 2005, Aenaon have been jostling for position in said Greek metal scene, with their 2014 outing Extance earning some high-marks from this online rag for its avant-garde meddling. True to form, Aenaon goes back to the well on Hypnosophy, signaling they’re well within the comparison range of Arcturus, Sear Bliss, the Norwegian Shining, and Solefald.

You often get what you pay for with a band so hamstrung by being obtuse, and that’s the case across Hypnosophy. The flagrant use of saxophones is immediately a red flag or welcome sign depending on one’s willingness to work with them in the context of progressive black metal. As it would go, opener “Oneirodynia,” and would-be single “Fire Walk With Me” (the album’s most coherent number) bubble and jerk, floating spicy solos and prog flourishes. The shove-y tone of Astrous’s vocals are the occasional burden, even as he gives way to friendly cleans on “Earth Tomb,” which again, heaps on the saxophones.

Obviously, for all the quirks found on the album’s seven cuts, there’s tends to be a burden of the weird, most notably on “Thus Ocean Swells,” which crosses up garish growls and odd chord pairings. The song—in the same manner as about 50% of Aenaon’s ideas here—doesn’t land on its intended dynamic target. Whereas Arcturus and Solefald (to a lesser degree) have always operated under the idea that the ‘weird’ would work around the ‘song,’ Aenaon hasn’t quite figured it out. Backwards Hypnosophy is not, but don’t be fooled by the avalanche of sax solos and oddities. 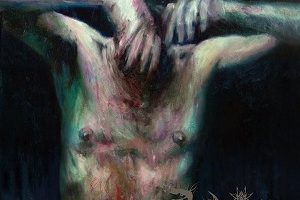