Adversarial – Death, Endless Nothing, and the Black Knife of Nihilism (Dark Descent) 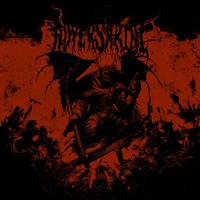 Death, Endless Nothing, and the Black Knife of Nihilism is quite a mouthful, but undeniably a pretty intriguing title. The same can be said for song titles such as “Cursed Blades Cast Upon the Slavescum of Christ” and “Lone Wresting Hymns to the Warmoon of Chaos.” Whomever is penning these titles does not have brevity on the mind! But how’s the music of Adversarial’s second onslaught? Bottom line – it’s okay.

Cool song titles aside, much of Adversarial’s arsenal is pretty well cherry-picked by many bands. Not to say that Adversarial doesn’t do it well, it just feels like well-worn territory at this point. While not as claustrophobic or doomy as the rest of the cavernous death metal movement, many talking points do apply. The dissonant, swirling guitar riffs battle alongside monstrous (and unintelligible) bellows all set to a dirty and dingy production value. Instead of doomy, swap in black metal and you’ve got a good idea of what Adversarial sound like already. Songs like “Immersion Void Paragon” crank out blast beats and blackened riffs just as often as the burly death metal machine fires off dissonance. While this gives Adversarial a more intense musical setting than many of that ilk, moving through the album doesn’t give much in the way of highlights. In this regard, it’s more in line with beastial/war-mongering death metal than anything else (yes, yes – too many types of death metal).

If you can’t get enough of the dissonant riffing movement, Adversarial is sure to please (alongside fans of extra-long song titles). But if you are looking for something with a bit extra to offer, you may want to think about checking out a few songs first.