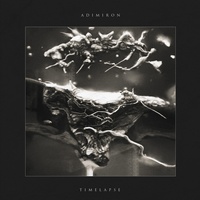 Gojira have managed to become leaders in the metal world due to their ability to harness some downright heavy tones with just enough atmosphere and emotion to keep listeners coming back for more. It’s not an easy skill to learn, and of course, we are seeing more and more young bands trying to ape the sound that Gojira have crafted. In the “sounds like-”market, Adimiron differs in that they’ve been around since 2002 and Timelapse is their fourth album. So this means that they’ve actually got some chops to back up their sound and diversify a bit.

While it goes without say that Adimiron are pushing a very Gojira-esque feeling on Timelapse, to label them as straight-up clones is not justified. You can also find some influences from Mastodon, Between the Buried and Me, even some Nero di Marte. Ultimately, Timelapse is successful because of the delicate balance that Adimiron plugs in between heavy, thrash riffing and atmosphere. For each “The Giant and the Cow” there is an “Ayahuasca” to cover the bases. The shouted/sung vocals of Andrea Spinelli maintain the range of the band throughout these sections, at times intensifying the needed aggression or calm.

While enjoyable in its entirety, the one small piece keeping Adimiron from something truly gripping is that the overall formula doesn’t seem to vary as much as needed. Sure there are moments of heavy and quiet and the atmosphere is solid, but nothing really takes risks too far outside of the box. The band is quite excellent at what they do, but if they are really to take things up to the next level, it’s time to break out of the comfort zone. But for now, this one is still an easy recommendation for fans of the afore-mentioned bands.