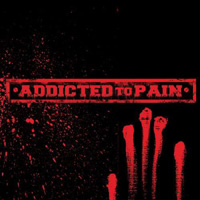 A bit like a junior Pro-Pain, Albany’s Addicted to Pain’s claims they are thrash seem to be a bit unfounded, as this 4-song EP is in the vein of meat-and-potatoes, American metal. You know, the no-frills type, stocked with the occasional boneheaded riff, and tough guy lyrics. Still, this is pretty well-done stuff, with Alex Perialas (S.O.D, Testament) manning the production boards, and the Megaforce Records tag behind it, so there is some merit to it.

No real standouts here, as the band treads some dangerous waters (read: nu metal) on “Trust Me,” which would be right up the alley of Drowning Pool or the like. Easy to get perked up when the song title of “Abigail” appears, but alas, it’s not a cover of King Diamond’s magnum opus, rather, the jam is a hearty crossover number with a Crowbar-like chorus. “Going Going Gone” probably has the catchiest chorus here, as Leo Curley’s harried barks manage to translate well when the gang vocals kick in.

At four songs, it’s pretty easy to get a feel for what Addicted to Pain is about, which makes the prospects for a full-length a tad hazy. How they build upon this middle-of-the-road EP remains to be seen, although there are far worse bands of this ilk out there. Far worse.