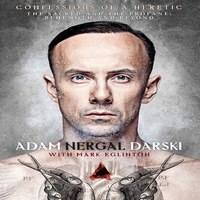 It could be argued Behemoth mainman Adam “Nergal” Darski may be a little ahead of the curve with his own autobiography. Reason being, the band (and man) haven’t quite hit the twilight/past their prime portion of their career, something that is usually reserved for aging metal bands. But, Behemoth, and more in particular, Darski, have endured quite a bit along the way to becoming the biggest Polish extreme metal band going. So after surviving a bout with cancer in 2012, coupled with the glut of media attention Darski receives in his homeland, an autobiography in the form of Confessions of a Heretic was deemed necessary.

Originally released in Poland in 2013, the English version was handled by Mark Eglinton, who was tasked with translating Polish to English, which if you’ve ever had to translate languages, is a supremely difficult task. Eglinton, along with the book’s original authors Krzysztof Azarewicz & Piotr Weltrowski did themselves (and their readers) a tremendous service by formatting the book in Q&A format, eschewing the sometimes huffy and self-congratulatory tone tomes of this variety usually take on. Instead, Confessions of a Heretic is bitingly honest, detailing Nergal’s difficult relationship with the Catholic Church (a dominant force in Poland), his black metal beginnings, and the steady, but remarkable growth of Behemoth, who at the dawn of the 00’s, were seen as nothing more than a Morbid Angel-inspired black metal band.

Anecdotes and attention-grabbing stories are a-plenty here, including some interesting back-and-forth regarding Behemoth’s controversial relationship to right-wing and facist black metal (claims Nergal denies), as well as his feelings toward America, a place that came across as a little strange to Mr. Darski. But there’s so much more, and it’s galvanized by excellent pacing, making Confessions of a Heretic the type of book one can jump to and fro on without having to worry about missing something. They’ve got it all covered here anyway. Should there be another installment, Confessions of a Heretic will be hard to top.