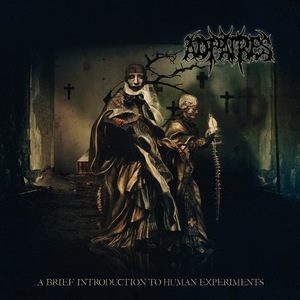 Back in 2013, a little known French death metal act called Ad Patres managed to impress with their variety of straight-ahead brutal death metal that captured the essence of the genre without having to get too fancy about it with their debut Scorn Aesthetics. But they seemed to fall off the face of the Earth not too long after, but have rightfully decided to take up the cause again with their second album.

Everything that was impressive about the debut has returned for A Brief Introduction to Human Experiments and has only been tweaked for the better. Ad Patres is violent, blunt, and to the point when it comes to their material. That’s not to say that there aren’t some subtle and sneaky ways that that incorporate both more technical and melodic aspects into the mix. In fact, that seems to be what gives the band their distinct charm. They can blitzkrieg away through a track at full steam and intensity, but don’t shy away from a moment to fling in a short, fiery solo or a brief moody atmosphere (“Symbiosick”). A few groovier moments also allow them to gain some traction as they drive forward (“Verses Void”). The tech shtick isn’t over-the-top but more akin to a Suffocation-esque approach by injecting it into the riffing structures (“The Disappearance of I”). The whole of the album feels like an older approach to brutal death metal that has been upgraded to sit comfortably in modern times.

Ad Patres overdue return is a welcome one. They pick up precisely where they left off and simply add to the songwriting chops of their debut and bring everything up a level. The result is an album that consistently rips for 34-minutes and offers no compromise, while incorporating enough melody and intricacy to it that it becomes hard not to get caught up in its destructive whirlwind.