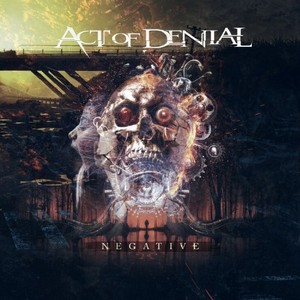 Melodic death metal with Bjorn Strid on vocals.  That’s generally all it takes to pique this scribe’s interest.  Strid is just such a natural fit to aggressive and energetic melodic death metal that it’s hard to deny a particular band/project when he lends his throat.  This time around, add in even more star power including Steve Di Giorgio (Testament), Krimh (Septicflesh), and John Lönnmyr (The Night Flight Orchestra) – all assembled by songwriter/lead guitarist Voi Cox and guitarist Luger – and it essentially seals the deal on a must-listen for fans of the genre.

Admittedly, there’s a lot of older Soilwork and Disarmonia Mundi similarities to be had, but given Soilwork’s continued movement into less aggressive and more melancholic waters, and the lack of output by Disarmonia Mundi, it’s hardly a complaint worth leveraging.  Just worth noting as you dive in.  But if that’s what you are down with, Act of Denial have this particular sound down cold.  Each track features some potent melodies laid on top of some aggressive and upbeat riffing that is sure to bury it’s way in your ear after the first listen.  It’s playful and energetic, but still carries plenty of firepower to blast its way through, evidenced on tracks like blazing opener “Puzzle Heart” and the furious “Your Dark Desire,” as frantic tempos pair well with some well-timed melodic slowdowns.  More melodious numbers like “In the Depths of Destruction” utilize some excellent groove in that mid-tempo range to really dig into, as well as a great melodic solo.  The title track triumphs with some driving aggression and intricately woven-in melodies, pulling together all the band is able to offer up.

A true no-brainer for fans of aggressive yet thoroughly melodic death metal (especially the two acts listed above).  There’s a ton of passion that bleeds through the instrumentation to provide a top-shelf offering that knows exactly how to put all of the pieces together to keep it exciting, memorable, and addictive.