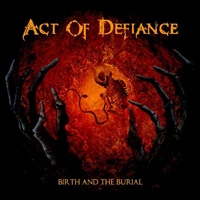 Journalists lob the ‘supergroup’ tag a little too freely in the metal realm, especially if multiple members come from a rather well-established act. Los Angeles, California’s Act of Defiance contains three musicians probably known to most familiar with Megadeth and Shadows Fall, as vocalist Henry Derek is the odd man out of that equation. Fortunately for the listeners, this quartet chose to establish their own brand of power thrash to avoid any obvious comparisons to their previous work with the debut record Birth and the Burial.

Guitarist Chris Broderick establishes frequently his upper tier shred skills while not forsaking the thick locomotive riffs that keep the thrash train a rollin’. A few passes at the menacing “Thy Lord Belial” and more commercially viable “Obey the Fallen” and you can sense that the man understands he needs to balance out the arpeggios and thousand note per measure breaks through meaty main riffs and transitions that adapt easily to those into the last 15 years of Testament’s catalog. Drummer Shawn Drover and bassist Matt Bachand can keep a steady mid-tempo metal groove for “Legion of Lies” while throwing down more of the power double bass licks and tricks on “Crimson Psalm”, a similarity that made early Grip Inc. or Nevermore favorable to the masses.

Henry Derek as a singer can gravitate between the raspy bellows and semi-clean melodies that keep Act of Defiance straddling that modern power thrash fence. He’ll probably get a lot of comparisons to current Chuck Billy, especially in terms of phrasing and enunciation on the moody “Refrain and Re Fracture”, although a twinge of Robb Flynn enters the picture at times during a heavier track like “Disastrophe”. Topping off the whole package is the creepy cover art from established artist Travis Smith and you have the makings of a 10 song, 47 minute effort for those who want a little musical muscle in their modern, shred-tastic thrash tunes.

Wishing to branch out from Megadeth is a smart move for Chris and Shawn – as Act of Defiance has a lot of creative ideas and smart execution that those who love Nevermore and Testament crave. 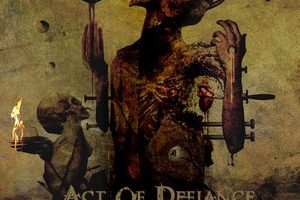