Across the Sun – Before the Night Takes Us (Metal Blade Records) 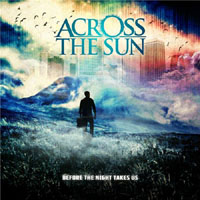 It’s rough terrain in the music business these days. Physical sales are down, online sales are up, and yet much of the current generation in this instantaneous marketplace clamor for new music and dispose of it as quickly as it comes through their computer walls. So imagine the view from the label director and CEO realm as they want to get the most collective bang for their bucks. Do you blaze new trails and hope the audience follows, or do you play it safe and go for what seems to be easiest to accept and consume?

Portland, Oregon’s Across the Sun make the case that it’s perfectly possible to cross the old with the new in their progressive hard rock sensibilities with this debut album. Seasoning their songwriting through three previous EP efforts during 2006-2009, Before the Night Takes Us gives you ten songs that fill your speakers with dramatic tension from the piano/keyboard play of Shane Murray and the clean/ riff shuffling barrage out of guitarist Sam Hafer, the latter able to hold your quiet gaze in the concluding moments of “Seasons” and then quickly burst into aggressive, pile-driving metal mode for the follow up “Descent & Discovery.”

The rhythm section of drummer Alan Ashcroft and bassist John Malloy can kick out the off-time tempo changes like the best technicians in the business – they’ve obviously studied their Tool and Meshuggah as much as an artist like Faith No More in songs like “Blessing In Disguise” and the forceful opener “Tipping the Scales.” The element that pushes Across the Sun into the stratosphere for possible best newcomer in 2011 will be vocalist Brandon Davis- he confidently pushes the melodic barriers and within four bars sounds like a man ready to burst blood vessels with his hardcore screams.

Favorites include the 70’s keyboard breaks through the otherwise thrash-oriented “Song for the Hopeless” and the slightly Children of Bodom-influenced title track that just keeps the riff train a-rolling. This will probably appeal more to homegrown audiences, and yet I sense a profitable future for both band and label if they play their cards right.