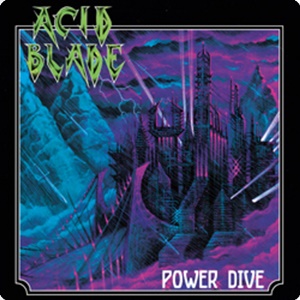 Out of the ashes of previous project Angel Blade from 2019 we gain Acid Blade – a quintet of heavy metal musicians from Dresden, Germany. Quickly releasing a three-song demo in May 2021 plus a single “Into the Light” independently earlier this year, the band signed with Jawbreaker Records for this debut album Power Dive. Those followers who love a primal mix of 70’s/80’s influences across the thrash, punk, US metal, and classic hard rock spectrum will delight in the blazing guitars, cultural hooks, magnetic vocals, and steady bass/drum syncopation that fires up the stallions.

The shrieking, outer-world falsetto nature to Klay Mensana vocally should gain fair acclaim – hitting those piercing highs that shatter glass on “Ablaze at Midnight” to go in tandem with the twin rhythm guitar / harmony angles from Alvin Goreman and Luke Lethal that followers into Judas Priest, early Metallica, or classic Riot live for. The sci-fi lyrical nature to specific tracks fits the energetic angles for Acid Blade – “Into the Light” and “The Tomb of Khentika Ikheki” (featuring the classic line ‘Forever you are mummified’) two killer tracks where the lead breaks convey similar outer limit touches, the type you expect on early NWOBHM records. Kudos to keeping the tones as organic as possible – this scribe in particular very pleased with the lack of digital manipulation on the drum performances from Eric Nukem, as well as allowing bassist Sci-Man ample space for his solid mechanics to shine on “King Killer”. By the time closer “Harpy on the Wing” unfurls its circular guitar lines, calmer mid-section instrumental twist all the way into a Maiden-esque vocal/musical conclusion, most listeners will be screaming at the top of their lungs for more.

We all know that this infusion of NWOTHM bands have been gaining steam, especially in primary strong markets like Germany. Homegrown talent such as Acid Blade possess the requisite songwriting and playing ability tools to be inching their way up the pack thanks to Power Dive, so don’t sleep on this unit.