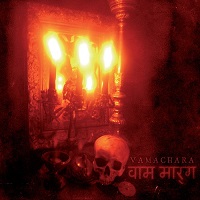 As an indication of Acherontas and Vamachara’s all-around blasé nature, it took Blistering roughly a month and over a dozen listens to type this review. Sure, other things have gotten in the way, most notably the holidays, work, Tecmo Super Bowl, pumping iron, etc., but if an album takes more than a month to review, then it’s probably going to be a dud. Judging by the rating affixed, Vamachara is dud city.

Claiming to have a 70’s occult rock influence in their black metal soup, Acherontas do manage to create the appropriate and over-wrought disharmonic atmosphere, especially on “Ohm Krim Kali,” which serves as a welcome tribal interlude at the halfway mark. It’s the type of song best served to be pushed to the front of the tracklisting, well-suited as a concert

intro, but when trying to intermingle it with the rest of the album’s six tracks, it’s probably the best thing the Greeks have done here.

The band’s sonic tactics are in line with the Swedish side of the black arts (the band is from Greece), such as Dissection, Watain, and Naglfar. Naglfar might be the closest reference point, save for the lack of a sterilized production job, which does serve the hard-charging “Blood Current Illumination” well. Past that, Acherontas fail to serve up anything remotely memorable, treading over familiar terrain with the aid of lifeless riffs and arrangements. The aforementioned 70’s occult rock influence is more of passing idea than anything, only glazing over the tail-end of the title track and album closer, “Drakonian Womb (Double Mem and Single Aleph).”

Black metal usually doesn’t lend itself to being easy to grip upon the first few listens, so the sonic pigsty that is Vamachara plunges into only further hinders the album. More than anything, we’re glad to have this one out of the queue; none of these songs

even came remotely close to sticking in the first place.