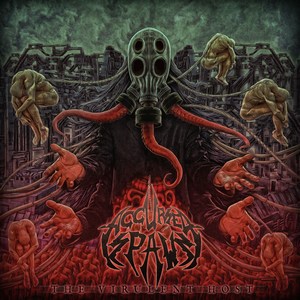 In the age of death metal bands generally swerving in two directions – hyper-tech wizardry or old school imitation/worship, Accursed Spawn bows to neither of these on their full-length debut. While one can easily see the line from the band to the ‘90s bevy of all-stars (Cannibal Corpse and Deicide most namely), they have wisely chosen to keep with the times instead of simply retracing the steps of the masters.

The Virulent Host is just plain death metal to the bone. It’s aggressive, in-your-face, and truly serves no higher purpose. That single and directed vision aids them though, as they don’t get stuck in the trappings many of their colleagues get hung up on. The riffs are consistently brutal, the grooves are enjoyable, and they never miss an opportunity to fling in some blasting drums or an enjoyable solo. Meat & potatoes stuff for sure, but the ear for detail is impressive – particularly for their first full-length (admittedly, the EPs and singles they have released probably helped in this regard). There’s enough technicality to cause the current fans of it to take notice, but they don’t go full-in being super flashy, instead focusing on making a bone-crunching song. The same could be said about the bass, as it plays a role (see “Interrogated Bludgeonment”) instead of following the guitars, but lacks the trending need to put it out in your face.

The Virulent Host is the type of album that wants to stomp all over your face. The viciousness may be rooted in the ‘90s approach, but they give it a fresh coat of paint with some more modern flourishes that enhance without getting in the way. Most importantly, Accursed Spawn are capable of keeping the affair fun to listen to and full of energy – something that should draw some fans who want a focused and downright heavy listen.