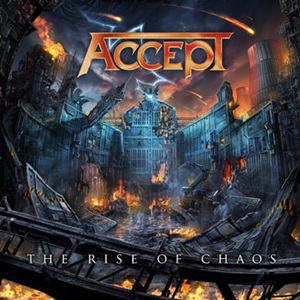 The resurrection of Accept passed the point of validity once Blood of the Nations and Stalingrad received rapturous response on a fan level – beyond the critics that have been clamoring the veteran band’s return since Udo’s permanent break following final 2005 reunion shows. It’s one thing to prove yourselves when you’ve made sideways moves that lean towards following growing trends (Metal Heart to the good, Eat the Heat not so much), but getting back on solid ground, fear always creeps in that the creative well could dry up at any time. The Rise of Chaos as the band’s 15th studio album features two new members in second guitarist Uwe Lulis (ex-Grave Digger) and drummer Christopher Williams, and yet still keeps the Accept formula riding the rails of familiarity to what most listeners know, expect, and grown to love.

The essential components of most Accept songs can be boiled down to a few things – a catching Wolf Hoffmann-led guitar hook, steady rhythm section support that lays down that mid-tempo or slightly faster groove, Teutonic background singing support to embed those choruses into audience permanency and a main vocal that’s heavy, occasionally screechy, but 1000% metal. You know that political/social commentary tends to be top of mind on the lyrical front – be it the struggle for older generations to live in an instant, digital driven world on “Analog Man”, or the social strife and political upheaval taking place globally as terrorists run rampant that fuels “Die By the Sword”, “Race to Extinction”, as well as the title cut. The album’s beginning strains feature a classical-laden instrumental on a “Metal Heart” plane, while there’s plenty of rockin’ riffs and parts to hum to – these gentlemen know how to ride the right melodic penchant and team up the appropriate simple yet effective chorus, as “What’s Done Is Done” is another Accept anthem for the ages.

Although driven by a catchy, circular guitar lick that takes me back to “Wasted Years” period Iron Maiden, “Koolaid” could be one of those see-saw numbers that rivets some and revolts others. The chorus goes for the obvious ‘Don’t drink the Koolaid’ line… making me feel like the punchbowl is going to bust through any media screen in close vicinity. Remembering of course this is the same band who wanted us to go “Screaming for a Love Bite”, the benefit of the doubt can be wavered for silliness once in a while. Truth be told, The Rise of Chaos gives the traditional metal mavens most of what they want, not veering into modern trends or trying to be anything but Accept – it’s just time for the band to possibly push a little more for stronger hooks and killer performances.