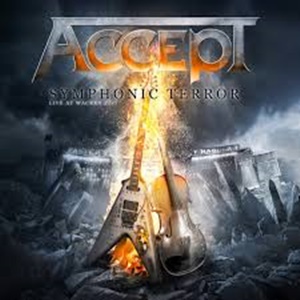 Documentation of a special one-off headlining set at the premiere global metal festival Wacken, it makes sense that Accept tackle a bit of the past and present in this two-hour set for Symphonic Terror – Live at Wacken 2017. Broken down into three distinct sections, the listeners will get five songs at the start exclusively with the band, then a few selections with orchestra from guitarist Wolf Hoffmann’s classical instrumental records before combining the band and orchestra in a parade of Accept hits of the Udo-era and current Mark Tornillo-led incarnations. It’s truly a sonic extravaganza to behold – and a massive undertaking regarding balance for both band and orchestra to blend together without one aspect overpowering the other.

The opening sequence includes a couple of recent offerings from The Rise of Chaos with “Die by the Sword” and “Koolaid”, along with “Final Journey” and the ubiquitous headbanging “Restless and Wild” to keep the faithful pleased. Tracks six through eleven venture into Wolf’s affinity for the classical genre – which has always been an Accept penchant when looking at their songwriting history. The tension and musicianship created when hearing full on violins, strings, and supplementary instrumentation against the conventional guitars, bass, and drums allows “Night on Bald Mountain” and “Double Cello Concerto in G Minor” to gain propulsion, mystique, intrigue, and edge of the seat anticipation movement to movement. And then you have band and orchestra developing new takes on Accept material – which includes a stunning rendition of “Princess of the Dawn”, a brighter take on “Breaker”, and the fine interpretation of “Metal Heart” where the audience also compliment the proceedings with their melody singing by the tens of thousands. Not content to rest on nostalgia, there are current bangers like “Teutonic Terror” and “Dying Breed” given fair airing – but the expected conclusion for “Balls to the Wall” leaves the metal legions clamoring for more.

Obviously it’s cost-prohibitive to hire a full orchestra and go on the road with them, but Accept like Yngwie Malmsteen and Metallica before them have done justice to the combination of the classical and metal genres for this release. Let’s hope the band’s high level of studio output since returning to the scene keeps going for quite a few more years as this serves as a healthy stop-gap for their discography.