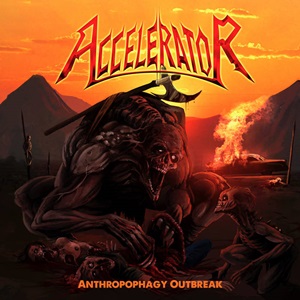 Often long-winded descriptions when it comes to metal bands in their background information need to be taken very lightly. When it reaches four/five sub-genre level, it borders on ridiculous. In the case of Long Island, New York act Accelerator – they are dead on when describing the sound of the quartet as crossover death/thrash – speedy, frantic, and containing enough lightning quick changes to ignite a riot on this full-length Anthropophagy Outbreak. The twelve cuts run the gamut from super-short affairs to average metal time frame arrangements, punching at the head and gut through numerous influences out of the late 80’s/early 90’s to current heavyweights.

The venomous musical stomp and rapid-fire vocal presence added to massive gang vocals for chorus emphasis make the Slayer meets D.R.I.-esque “Killing Machine” a standout, especially because of the thousand note lead break barrage at the conclusion. The rhythm section obliterates and shifts from semi-blasts to incredible grooves while maintain a thrash standard, as “Black March” contains riff after riff that push out a Demolition Hammer or Morbid Saint influence, the instrumental sections sure to cause neck strain or propulsive pit pummeling. You’ll hear familiar Lombardo-esque cymbal rides, New York style crossover guitar licks, party songs with a current political theme in the less than a minute “Nuclear Beerfare” (best line: Because beer trumps over evil), and just an overall respect, admiration, and tenacity for the greatness of crossover death/thrash. Joe Murray has that acidic rasp of a voice down pat, spitting out the words on the title cut and “Pale Rider” like a vigilante running from the law. Where the modern influence comes in to these ears is the lively, punching tones and smart shifts that take place within each track – much like Municipal Waste, it never comes off the rails but there’s going to be something tantalizing for all who love metal.

Thankfully Accelerator aren’t another Bay Area-worship act parading their love for Bonded by Blood or Reign in Blood – this is slice and dice work that cuts to the chase, executes, and moves to the next idea to crush again.