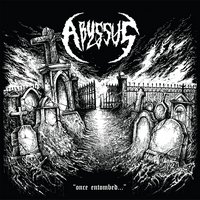 It’s hard to look at the title of this album without thinking of the mighty Entombed. But thankfully for Abyssus, that’s as close to Entombed as they come with their version of old school death worship. This Greek band is more comfortable in the land of Obituary, Bolt Thrower, and Asphyx.

It’s important to note that Once Entombed… is a compilation of the band’s early material, which the album nicely puts in reverse order, starting with the most recent split works to their debut EP. This album comes off of the success of their first full-length, Into the Abyss, which was released last year. For those unfamiliar with the band, there’s quite a bit of Obituary worship. Vocalist Kostas Analytis is a near dead ringer for John Tardy and the band’s sludgy take on death metal certainly draws some influences as well. But it’s not so much copy and paste, as the burly Bolt Thrower riffs (see “Unleash the Storm”) veer the band in a different direction, as does some occasional shifts towards d-beat and crust influence. There’s even a little Slayer that comes out to play too (outside of the “Postmortem” cover that concludes the album). Regardless of the influences, there’s some steady energy to the material, and they handle the throwback elements well, without putting a damper on the fun.

Once Entombed… works on two levels – a solid introduction to those who may not be familiar with the band, and a quick pick-me-up for those craving for some more Abyssus while their next album is served up (which one would guess shouldn’t be too long given the band’s prolific rate of releases). It may be a bit Obituary-ish, but there’s no denying it’s a enjoyable trip to take.