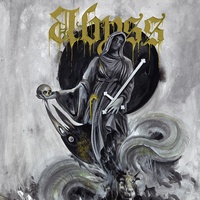 Toronto’s Abyss make their full-length debut in 2015, since forming in 2009. After two demos and a live record in that span of time, these deathened-grindsters finally release their first official record, which releases April 14, 2015. Despite the six-year existence of the band, Abyss get in and out in a flash – the eight song outing running only around twenty minutes total – and you know, for what they do, it suits it just fine.

Old death metal meeting old grindcore is the flavor here. Napalm Death meeting Exhumed, perhaps, will get you close to the idea. Standout track being the longest of the bunch with “Thrall of the Elder Gods” at five and a half minutes, we find the band running the gamut of their stylings, including slower tempos in doomy-death tones, mid-tempo punk encrusted romping, anguished guitar soloing, and the ever present (and surprisingly clear) vocal assault. In all, it’s actually the slowest of the lot, keeping the speedier, pit-friendly, frenzy of double-time rhythms with smatterings of blasting beats to the shorter tracks such as “Atavistic Decay”, “The Atonement” and the lead-off title track.

A very straight-forward record for fans of the older ethos of death and grind, you’ll find nothing of “beauty” herein (why would you expect that?). Mixed and mastered by Toxic Holocaust’s Joel Grind, Heretical Anatomy has clear and cold production, which works well for the sound. Good use of varied tempos, very solid rhythm section, cutting and crisp vocals, textured guitars unafraid to wail some hellish solos, and a well-developed sound and cohesion combine to form a very solid debut for these Canucks.