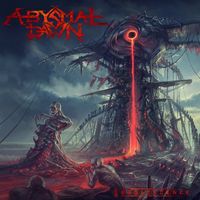 Ever one of the more consistent of the modern death metal bands of the last decade, a new album from Abysmal Dawn comes with certain expectations. Since the band’s inception, they’ve strived to get just the right combination of brutal, heavy riffs, interesting melodies, strong leads/solos, and a killer production. Obsolescence continues in this fine tradition, and may just be the band’s finest hour yet. Not to mention the continued tradition of some absolutely fantastic artwork.

Much like their earlier material, Obsolescence knows exactly how make songs instead of technical displays. There are dynamics in the tracks, which is made very clear even by the first track, “Human Obsolescence.” A driving opening (which includes a wicked scream from vocalist/guitarist Charles Elliot), but knowing how to effectively slow down into some more groove-based segments and push into a melodic lead. The rest of the album follows suit, which some highlights including the mid-tempo headbanger “Inanimate,” the melodic opening of “By My Demons,” the calculating “Laborem Morte Liberat Te” (which has some cool chanting of the song as well), and of course, the excellent closing cover track of Dissection’s “Night’s Blood.” The cover may not deviate too far from the original, but the death metal sensibilities that have been tossed into the track make it a true standout and give it a bit of it’s own life.

While it might be business as usual for Abysmal Dawn, this is top-shelf quality death metal by a band that knows how to play to their strengths. Abysmal Dawn continue to refine their attack, and there’s very few in death metal that shouldn’t embrace this one with open arms.