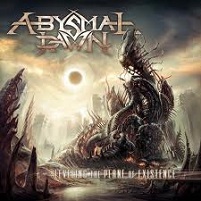 The latest granite chunk of brutal death metal from Los Angeles’ Abysmal Dawn comes in the form of Leveling the Plane of Existence, a crusher of an album and the first solid album of the new year. While the trio don’t exactly reinvent the wheel with their new material, they certainly know how to create catchy riffs and hooks among the controlled chaos that is their brand of death metal.

Equal parts vintage F-Zero-styled blazing speed and pulverizing heaviness,Leveling the Planes of Existence doesn’t disappoint the listener with the typical filler songs too many a record these days contain. It’s obvious that these cats took their time in honing how each song

was to be constructed, something that also tends to be sorely lacking from the bulk of metal these days. Without trying to sound like a bitter old metalhead who yearns for the days of old, Abysmal Dawn do this type of metal the right way.

However, with that being said, the album is a better listen in smaller doses. Like fellow brutal death metal brethren Krisiun, Vader, Sinister, Hate Eternal, etc, the album tends to become too similar as it wears on. While each song in solitude stands tall in terms of production and delivery, there isn’t too much to differentiate between them. From the first proper song “Pixilated Ignorance” (after a brief intro) all the way until closer “The Sleeper Awakens,” Leveling… is relentless and dizzying and while it’s a blast, it all just runs together like a relic of oil work that was splattered with blood; the paints all smear together.

In the end, each entrant on the album is either solid or great, especially highlight track “In Service of Time.” It’s just a shame that the album as a whole doesn’t stick out or stick with the listener like each of the nine tracks (minus the eerie intro).