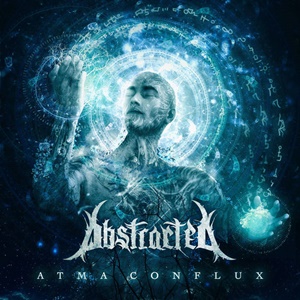 Taking a moniker from a Scar Symmetry song (Pitch Black Progress the album in question), Brazilian act Abstracted began in 2014 – fleshing out their lineup over the years while recording a debut EP Ophidian in 2015. Recording this debut album Atma Conflux over a three-year period from 2018-2020, the quintet possesses a progressive death metal outlook on these seven tracks that are epic, packing many diverse twists and turns while being mindful in terms of circular hooks and specific earworms to keep listeners on edge.

When musicians choose to open and close a record with songs that encompass twenty-nine minutes of material as you get for “Introspection – Ego Death” and “Prospection – Ethereal Rebirth”, you know you are going to receive a wealth of ideas to absorb, engage, and reflect upon. A bevy of guitar harmonies, counterpoint measures, and equally engaging bass passages set up some versatile technical thrash/death riffs that soar. Add in some 70’s-style keyboard runs and you have the makings of a progressive delight with “Wither to Dust” – a five-minute headcrusher that contains the right subtle mid-tempo death transitions and growls against the Watchtower meets Iron Maiden/ Cynic-like chops. Everything from lower jazz / bass motions to fluid acoustic picking against some snappy snare/cymbal/kick combinations that go up and down the BPM register can take place measure to measure – somehow managing to be cohesive as to not fall down the cliffs of intricacy as to lose the average listener.

The instrumental “Whisper into the Void” has this exotic driving nature – jagged riffs, propulsive lead breaks, tremendous double kick and proper blasting without overuse, where Allan Holdsworth would be proud of his influence pulled through a progressive thrash/death prism. Specific circular rhythms where the dual guitars cascade in uplifting aural passages allow the vocals to also open horizons for a mixture of brutality and alternative/clean contrasts – “Eightfold Path” intertwining some djent/metalcore stunted accents against shimmering riffs, drop on a dime keyboard-laden new age calmness before more gear shifting manipulation flexes from all bass, guitar, drum, and vocal angles to make this 9:51 outing a surefire winner. Add in a conceptual theme for the lyrics surrounding self-knowledge, redemption, pulling from all things esoteric and you’ll know this quintet places as much importance on intelligent words as the magnificent musical components they flesh out.

You don’t hear many bands that cite influences from Obscura to Evergrey, Opeth to Necrophagist, Gojira to Between the Buried and Me – as well as a bit of Coroner, Cynic, and Atheist for good measure. Abstracted with Atma Conflux should get deep technical/progressive death metal mavens talking – it’s jaw-dropping performances ready for intense listening sessions that should be fruitful for discovery and appreciation.