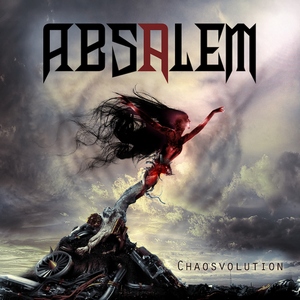 With more and more bands coming right out of the woodwork with a first album that takes you aback with how strong it is, sometimes it’s also easy to forget that the first album is also simply that…a first attempt for a band to discover their sound and direction. In the case of Absalem, there are some shining moments on Chaosvolution, but there is also some elements that are more of a work in progress.

Being billed as melodic death metal/metalcore in the vein of Arch Enemy and The Agonist, Absalem do live up to the sonic description. Modern melodeath metal riffing accompanies a singing/screaming approach from vocalist Gina, and they check the appropriate boxes off for alternating between heavier and more melodic moments. Unfortunately, they stumble a bit out of the gate with “Deceiver,” where some odd vocal switch-ups atop some chugging riffs that don’t have all that much personality behind them. Far better is the follow-up (the title track), where more melodic sensibilities are more clearly defined and the song feels far more fleshed out. Some catchy guitarwork lies below the chorus lines, and a galloping riff structure gives it the punch it needs to be more dynamic. Similarly, crunchy rhythms in “The Witness” and “Sinner” help to serve up more contrast between light and dark. The album closes on a strong note with “Burned to Ashes,” due to thrashy riffs and a much more aggressive tone than the tracks preceding it. Unfortunately, much of the remainder of the album stays in more tepid waters, never really bringing in the level of heaviness needed to sell the contrast within the music. Moreover, many of the riffs just don’t grab the listener. They are too familiar in tone to the genre-standard (“Fear My Wrath”) or go a bit too far into modern territory (“Brainshot”).

Chaosvolution isn’t a bad album by any stretch of the imagination, but it’s bogged down by genre tropes and a lack of aggression. They nail it on a few songs, so the potential is there. It’s just a matter of increasing the dynamic to give it a stronger sense of urgency and taking more creative risks.