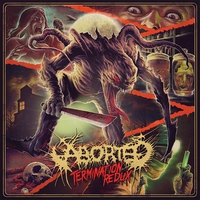 Where does the time go? So many known extreme metal bands are now pushing towards decades of existence, which is a good thing for the scene but starts to make one feel old. In celebration of their 20th anniversary, Aborted has decided to deliver a new EP to satiate the hunger of fans until their upcoming full-length rears its head.

Containing 3 new tracks, a re-recorded version of the Engineering the Dead classic “The Holocaust Incarnate” (lovingly titled “The Holocaust Re-Incarnate”), and an intro snippet, Termination Redux acts as a nice appetizer. With reference (assumingly) to the band’s anniversary, the intro states, “Now it is time to go back to where we came from,” it’s not long until the title track starts doing what Aborted does best. In line with everything the band has done on their more recent work, the intense death/grind is just as brutal and downright catchy as always. Not a bad pick in the bunch of new material, but the more hardcore sounding “Bound in Acrimony” stands out due to the sheer abrasion factor. The band plays it straight with “The Holocaust Re-Incarnate” but the modern production job makes it worth hearing again (why mess with a good thing?).

A nice little stop-gap release before we get a full offering, Aborted fans will undeniably eat this up. Aborted have always been able to make catchy death metal while staying within the “proper margins,” and Termination Redux is a solid reminder of why Aborted has been able to stick around for the past two decades.