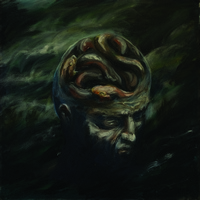 Another new band with plenty of star-power to back it up, Abhorrent try to craft out their own place within the ever-growing tech-death scene. Comprised of Erlend Caspersen (Spawn of Possession), Lyle Cooper (ex-The Faceless) and a number of guest appearances not limited to Trevor Strnad (The Black Dahlia Murder), Chalky (ex-Psycroptic), and Malcolm Pugh (Inferi, A Loathing Requiem), you can practically imagine the “sounds like” sticker already. But are names alone enough to carry things to a new level?

Intransigence isn’t going to out and out surprise many followers of technically flavored death metal, but that doesn’t mean it’s not worth checking out. Obviously there’s a certain level of playing here, and the spacious production lends towards giving everyone equal time in the spotlight, but there is something to be said for Abhorrent that many bands don’t have a firm grasp on. There are a number of more subdued melodies as you make your way through the album that will catch you by surprise (read: you may have to listen a few times first). “Reward System Malfunction” is one of these little sleepers, with the track slipping into a more mid-tempo, drifting melody towards the end of the track before a quick speed run. There’s also the dark acoustic opening to “Larva” that sets off a more eerie feeling. Other tracks, such as the surprisingly effective intro that is “Passage,” give off just a slight bit of dissonance to meld with the usual tech feel.

While some will be brought to the party by the name game, it’s the subtle melodies that slowly creep out of the shadows that will keep you coming back for more. A strong debut that has some potential to move further into greatness with the next album or two beyond.