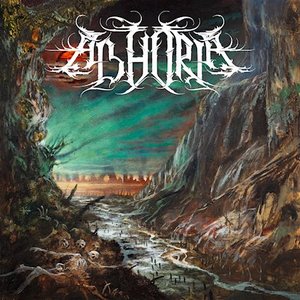 A fresh black metal act to start off your 2022 year, Abhoria bring their full-length debut to you via Prosthetic Records.  As someone who is a bit picky when it comes to black metal, it does take a bit of intrigue to grab the attention away from other acts within the DR inbox.  Something that Abhoria manages to pull off by providing a fiery, black metal release that purists should be able to enjoy, but still offer some interesting perks for those who may not usually wade through the waters of a release like this.

One of Abhoria’s strongest assets is their riffs, and they do not fear flexing them.  Given the blast-beat driven fury that bands like this tend to live in, it’s no surprise to get plenty of them in Abhoria’s debut.  You can also enjoy the buzzing guitar sound, giving them that homage to the past – but it ends there.  Given the genre’s tendency to produce a blurring whirlwind of blasts and sometimes incomprehensible buzzing, Abhoria’s riffing is frequently ear-tickling and nuanced.  Opener “False Idols” gives you a good idea of what to expect over the course of the album, with blackened riffs starting out the track, but it leads into more interesting melodies and riffs as the song progresses.  There’s a bit of earcandy to them, whether some unrelenting speed with tremolo picking, or some weighty mid-paced melodies (see “The Thorn”), and it makes the tracks stand out more than you may expect.  The final track, “Sunless,” really sees the band stretching their wings beyond the black, with a more sullen approach (with some clean-ish vocals) and less emphasis on the blasting elements.  It’s a fantastic closing track, and offers promise for where the band might head in the future.

Abhoria are off to a great start with Abhoria.  It introduces their blackened influences without turning them into a “sounds like….” band, and showcases an emphasis on memorable, yet still ruthless sounding riffs and intriguing melodies.  Those who want something black metal in tone, but not confined to the stereotypes should find some comfort here.