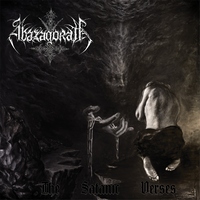 1995 second wave by way of 2014 New Jersey, Abazagorath admittedly hooked me from the word go in ‘Mahound’. Though possessing an adequate production that towers above anything its sonic inspirations may have aspired to, The Satanic Verses is nevertheless an album steeped in the old world values of the black metal mold. Cacophonous and tunneled, blast-heavy and lathered in shrieks and tremolos galore, this is a theme executed to an absolute T. The band’s first album in a decade is a monster and instead of beating the dead cross to death instead draws heavily from one of the most unspeakable/fascinating areas of Islam and its similarly rich iconography.

No artsy leanings, no political soap-boxing, no ulterior creeds or nonsensical mantras. Everything on The Satanic Verses is no-frills and well executed ‘classic’ black metal, that is to say, no shimmering forays into post-metal, the melodicism serves to further the dark atmosphere, and the pulse is almost entirely kept by straight-forward blastbeats. IT IS AWESOME. Whether on the aforementioned or ‘The Angel Gabriel’ or ‘Visions of Azrael’ the purity of focus is unparelled. The anti-religious, the screams into the throws of night, all the mythologies of eras forlorn (within our own time and within black metal itself) brought to life on frigid winds. It’s refreshing perhaps because now no one is making black metal quite like this anymore, even the majority of Scandinavian originals having moved on (Marduk and Urgehal notwithstanding).

Melody does surface from time to time amidst the perpetual blaze of the album proper, (likely guest) clean vocals (and some lovingly evil acoustic guitar) showing up in ‘Return to Jahilia’ along with the exploratory instrumental ‘A City Visible but Unseen’, a particularly pleasant bit of repose for most of its run time. Surprises run wild throughout the whole of The Satanic Verses and, if nothing else, are often loving showcases of why black metal found such a visceral reaction in the world to begin with. Exacting, focused, and razor sharp, this is exquisite black metal.