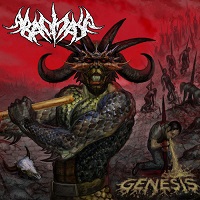 Released a few months after the untimely death of singer Jason “Plunger” Sica, Abacinate’s Genesis is a rather competent, but overtly bland mix of death metal and hardcore. And what’s up with that cover? One look at it and it’s easy to peg this is a traditional metal release. Not exactly in line with Suicide Silence or Whitechapel, but we digress…

With the usual mixed bag of beatdowns, harsh growls, and blazing blast beats, Abacinate are able to keep up with the major players in the modern death metal scene. There’s no real boneheaded beatdown moments here, save for “Disturbing Remedies For A Desperate Disease,” which is rescued by some melodious guitar work, something the band should have explored more during this 10-song offering.

The necessary amounts of gruelling chugs make up the interesting points during “Purveyors of Scum,” while samples are scattered about (some funny, some not), ultimately culminating in the two-part “Laughing In the Dark” portion of the album. Abacinate are helped by a crystalline production job that for once, doesn’t make the drums sound like they’re played by a machine, though.

Abacinate’s unwillingness to rely on the beatdown is one thing they have going for them, although since the death of Pica, it’s unclear if the band will move forward or not. With Genesis, they come across like a band rather secure in their placement right smack dab in the middle of the faceless modern death metal herd.