A Sound of Thunder – Out of the Darkness (Nightmare Records) 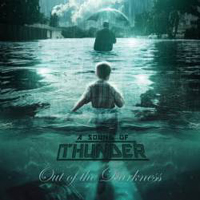 The first three thoughts that came to mind upon listening to A Sound of Thunder’s Out of the Darkness album:

Beyond those minor points, A Sound of Thunder sticks out like a sore thumb on Nightmare Records’ power metal-dominated roster. Instead of following the power metal company line, the Baltimore-based quartet opt for a more traditional metal sound, picking from several eras of metal and rolling it all into one rather compact, stylistically-sound effort in the form of Out of the Darkness.

Naturally, Osegueda is the X-factor, and she proves to be more than capable. Her vocals have equal leather and softness (if that makes any sense), which allows her to be brash (“Kill That Bitch,” which is a really funny song) and foreboding (“Murderous Horde”). She’s certainly in command of these ten songs, and brings along a hefty amount of vocal class, like on opener “The Day I Die,” the excellent “A Sound of Thunder”, and “This Too Shall Pass.”

Musically, the band is able to cross the wires of European and American metal effortlessly, even throwing in some doom-laden riffs on the aforementioned “Murderous Horde.” The up-tempo title track has “A Be Quick or Be Dead”-like angle to it, while the 8-minutes and counting “Calat Alhambra” serves as the album’s true epic piece, frontloaded with acoustic guitars and storytelling from Osegeuda.

Far and away the best band on the Nightmare Records roster, A Sound of Thunder has enough versatility to transcend multiple metal sub-genres. It’s not an easy thing to do, and while many bands have tried (and failed), A Sound of Thunder demonstrates on Out of the Darkness that they’re poised to become one of America’s true bastions of metal. Excellent stuff; very much recommended.