A Scent Like Wolves – Mystic Auras (We Are Triumphant) 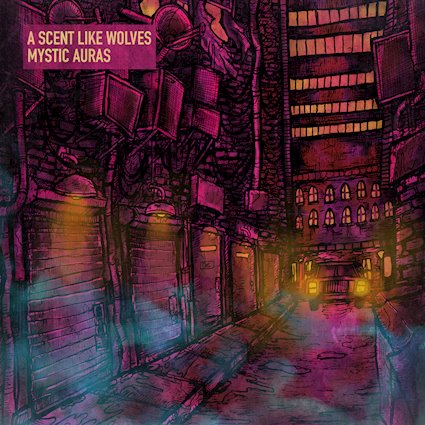 When metalcore blew up in the early 2000s it was all over the place. While that eventually died down, the sound itself stuck around, with some of the veteran acts continuing along, paving the way for newer acts to try their hand at it. A Scent Like Wolves have been at it for over a decade at this point, with Mystic Auras being their third full-length. While it does stick to tried and true territory, it’s an enjoyable release for those that still dig the genre.

Taking the metalcore template and giving it a modern polish – incorporating a more musically intricate backdrop while simultaneously providing more hooky rock elements, A Scent Like Wolves sound effectively nestles into the groove that many an act has dipped into in more recent years. But that doesn’t prevent many of these songs from really taking off and soaring, both with the riffing and catchy choruses. Some pleasantly heavy moments are sprinkled in to give more contrast to those choruses that you know are coming, and all the while without having to make breakdowns the centerpiece. Instead songs like “Death Effect” and “Eastern Lights” focus on modern proggy grooves and riffs to playfully bore their way into your head, alongside some strong melodies – even if some chugs pop up they are never the main attraction. Balance is key, and even if some of the clean vocals veer a bit too far in the modern direction for some metal fans, the switchups in dynamic are what keep the release sounding more fresh instead of a simple retread on the formula. As does the boucing guitarwork, such as on closer “Aquamarine.”

Mystic Auras fuses what has been working in the metalcore world over the past few years and runs full speed with it. It works well for what it is and provides more than scenery-chewing vocals and chugs, giving plenty of hooks on the instrumental side of things to keep folks interested.