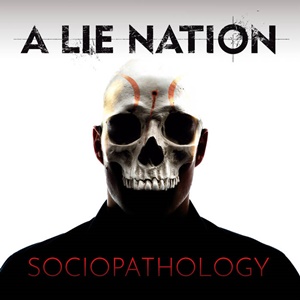 A slow and steady workload can often produce strong results as musicians gain confidence and experience at their craft. Finnish act A Lie Nation started in 2009 from a garage band fusion of two other groups – releasing a series of digital demos plus two EP’s Human Waves and Begin Hate during the 2010’s, setting the stage for their debut album Sociopathology. Due to their diverse outlook, these eight songs combine the energy plus intensity of melodic death and black metal – keeping listeners engaged in a relatively quick hitting affair that gets the job done in a tidy 33 minutes and change.

When the group chooses to floor the proverbial tempo accelerator that’s where the Scandinavian black moments shine – the front half of “Scum” as well as the tumultuous electric to acoustic twister “Conclusion of a Thought” serving terror-filled musical action beyond the fierce, piercing screams of vocalist Miikka Pyykkönen. Meanwhile the guitar harmonies for Joni Moisanen and Jussi Tuomisto in addition to their riff machine precision duties stabilize the earworm aspects of the album – be it more thrash-based right away for opener “Ihmisen Projektio” or groove-driven in melodic death glory during “While Our Wounds Gently Bleed”. Another ace in the hole is the diverse prowess within the rhythm section – quickly able to move through subgenres song to song from a more mid-tempo “21st” to the serene versus blasting measures of “God of This Age” without losing any impact. Smartly choosing to spend extra time, care, and money on the production values also ensures a sonic output that is full, vivid, and vibrant. The quintet delivers a great mix of sounds, even introducing a bit of a darker gothic vibe in spots with lower spoken word voicing as well as acoustic passages to set up louder contrasts.

A Lie Nation set themselves apart from others in their category because of a love of multiple facets within the extreme metal category, yet never forsaking those melodic or hook aspects necessary for listener retention. As such, Sociopathology could hit a decent amount of ‘band to watch’ lists for 2022.