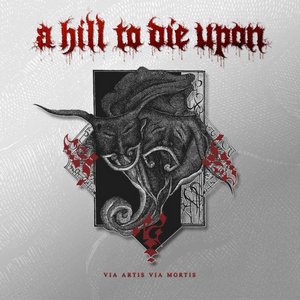 Three years removed from the excellent Holy Despair, A Hill to Die Upon return with their fourth album. While the band has long been compared to Behemoth in their sonic approach, it’s really with Via Artis Via Mortis that those days are certainly numbered. The band has truly moved away from that approach in a way that’s both logical and still intriguing.

A Hill to Die Upon has been rooted in both death and black metal since its inception. VAVM continues the expansion of their blackened side that really started with Holy Despair. Instead of more bulldozing blasts, the shift is one that’s in a darker (yet more melodic) direction. The tempo hangs in the mid-range for more time than they’ve endured previously, and despite the darker vibe of the songs, they do find plenty of opportunity to introduce riffs that still feel playful. “The Garden” and “Artifice Intelligence” are two of the stronger cuts in this regard, really taking advantage of a slower tempo to draw up some blackened melodies that never lack for bite, yet not afraid to accelerate every once in a while too. “Sorcery and Sudden Vengeance” is about as fast as it gets this time around, bringing a welcome switch-up at that point in the album, with the more straight-forward and almost black ‘n roll vibe of “Mosin Nagant” doing the same towards the end of the album. Of course, the lyrics behind the music deserve some praise (as usual), with the band’s usual variety of fodder from the spiritual to the historical and beyond giving the music an added boost.

Continuing to grow and evolve, A Hill to Die Upon has really been coming into their own with their last two releases. The melodies and blackened atmosphere are a welcome addition to the band’s arsenal, and makes it a more curious position as to how they’ll continue to move forward.