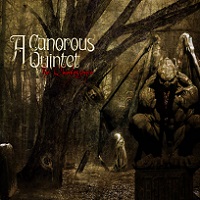 Well, here’s a name that hasn’t come down the pike in a while: A Canorous Quintet. Primarily known for the band in which current Amon Amarth drummer Frederick Andersson got his start, ACQ also features one Marten Hansen in the ranks, one of the numerous vocalists October Tide has used in their stellar career. The band eventually changed names to the much easier This Ending, resulting in a label deal with Metal Blade, and since Metal Blade releases Cyclone Empire albums domestically, the double re-release/repackaging of the band’s sole studio albums in the form of The Quintessence makes sense.

The albums in question are 1996’s Silence and the World Beyond, and 1998’s The Only Pure Hate. Silence… had the good fortune of being recorded at Abyss Studios under the guide of Peter Tagtgren, but the gloss and power of the Swede’s production jobs are not found here. Instead, it wanders into Morrisound territory, thus trapping whatever melodic ideas the band had in their death metal disposal. However, the melodic burn of “Naked With Open Eyes” hits the mark (boy is Hansen a rabid dog), as does “The Black Spiral.”

The Only Pure Hate is the better of the two, with the band embracing the intricate song structure style that Dark Tranquillity help mold on The Gallery. Guess the same could be said for At the Gates pre-Terminal Spirit Disease; A Canorous Quintet fit somewhere between the two. The Quintessence is a nice grab for those who were around when No Fashion Records (ACQ’s original label home) were of prominence, and melodic death metal was still a fledgling idea. It never hurts to see where it got its start…and the under-appreciated bands that help lay the foundation. Count A Canorous Quintet in that group.

A Canorous Quintet on Myspace