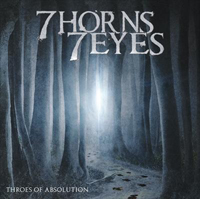 On one hand, it’s nice to see a new American metal band not go down the dreaded deathcore/djent/lame-o route. Had about enough of that. On the other, Seattle’s 7 Horns, 7 Eyes are not quite at the game-changers they’ve been advertised as, although their concoction of atmospheric, modern death metal on their Throes of Absolution debut as some serious pop and density to it. They’re just not a revelation, that’s all. (And yes, the American metal scene is in dire need of a revelation.)

Throes of Absolution sounds European in its production values, which is always a wise move. Having the masterful Jens Borgen (Opeth, Katatonia, Amon Amarth, etc.) master the thing was the icing on the cake, although a lot of the credit should go to guitarist Aaron Smith, who handled all production and mixing duties. Point being, the album’s startling atmospheric depth and boldness is one of its defining traits, allowing for the spiraling melodic moments on “The Hill Difficulty” to take shape.

There’s a steady diet of straight-forward, yet layered jams here, most notably opener “Divine Amnesty,” which starts with a chilling introduction, then heads into a doom riff-laden foray. The band has an odd way of working melodies into its songs; it’s as if they want to be melodic, but not full-on melodic, and it hinders songs like “Delusions,” “A Finite Grasp of Disillusion” and album closer “Regeneration.” Whenever the band starts to build a melody, they quickly kill it, thus creating some mild frustration on the end of this writer…these songs could be infinity more explosive if the band would allow it.

Given the alternatives presented, 7 Horns, 7 Eyes are a far more interesting proposal than a vast portion of what the American metal scene has to offer at the present time. They’re still very raw, exemplified by Throes of Absolution’shit-or-miss nature, but methinks they’ll have a much longer shelf-life than one-time American metal “saviors” Daath and Eyes of Fire.