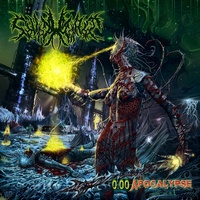 When it comes to death metal, slam has to be one of the more primitive forms left at this point. Most slam bands focus on those slow, groove-oriented riffs that are meant to rock listeners around the pit in the live setting. There’s not much attention paid to making memorable riffs and most revel in boring predictability and mediocrity. Russia’s 7 H.Target (a rather odd name) pleasantly leave the predictable behind and add some clever musicianship to their slamming death metal.

What separates 0.00 Apocalypse from the rest of the slamming crowd is it’s maniacal unpredictability. While it doesn’t sound like a mess, you are never quite sure what the band is going to do around the next corner. It’s the type of album that you listen to at full attention throughout. There is also a technical aspect to the riffs that allow the band to really go off the wall at times (“Cyborg Kombat”), but never reaching that point of sounding completely ridiculous. Without having to rely upon constantly throwing in slamming riffs, the ones that are here become huge. A personal favorite aspect here is the thick guitar tone that brings to mind Skinless’ Progression Towards Evil (certainly one of the best in this particular field), bringing slams in songs like “Meatball Machine Story” to absurd levels. Of course, the vocals need to convey that low gurgle, and 7 H.Target doesn’t disappoint (though there’s nothing new brought to the table either).

Equally interesting to fans of both Wormed and Devourment, 7 H.Target strikes a nerve right in the death metal sweet spot. If you tend to avoid these type of bands, give these guys a shot as they are bringing more to the table than most of their peers. Absolutely punishing stuff.