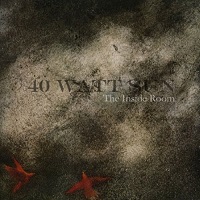 Counting (or math for that matter) is not Blistering’s forte, but we are of the belief that there are a total of less than ten riffs on 40 Watt Sun’s The Inside Room. Naturally, this compels one to think that this is a necro black metal album, for those goons never hesitate to run a riff into the ground. Instead, The Inside Room is a gallant, concerted doom metal platter, ripped right out of the holy annals of Candlemass and Solitude Aeturnus, thus making it quite stirring. And hardly necro.

Slow as it is lumbering, the five compositions here aren’t in a rush to get the tempo out of first gear, which is perfectly fine. The riffs presented are eerie and oppressive, thus serving their purpose of being repeated ad infinitum. Opener “Restless” is proof positive of this, with guitarist/vocalist/main dude Patrick Walker wrapping his head around a devilish Nightfall-era Candlemass construct, albeit with far more bleakness, also the recalling the likes of fellow UK doomsters The Prophecy.

Walker’s vocals don’t require much TLC, as the gloomy aspects of album highlight (and potential doom song of the year

) “Open My Eyes” are simply breathtaking, with again, two riffs filling up the songs ten minutes and counting time allotment. The band’s lazy (but lazy in a good way) backbone provides the apropos behind-the-beat tempo to this, as well as the gritty “Carry Me Home” and hopelessly optimistic “This Alone,” a song that is the closest thing to a traditional doom love song as anyone will get. Walker isn’t afraid to wear his heart on his sleeve, that’s for sure.

An absolute must-have for the ever-hungry doom metal ranks, The Inside Roomrevels in bleak honesty, along with a bare-bones approach that speaks volumes to the band’s superior riff-writing capabilities. Like, there’s virtually nothing to this album in terms of variation – it has less riffs than we have toes, and a pace that would make Disembowlement proud, but man, The Inside Room sure strikes a serious nerve.